Here we have Susan, recently the victim of a head-injury, attempting to negotiate her way through an hallucinatory existence with an idealised family in an eternal garden when rude reality threatens to intrude. This time, Susan snaps at Lucy to shut up.

Sarah Parnell as the put-upon Muriel is a creation of genius and Pete Woodward and Simon Walton as vicar and doctor respectively, give nicely-studied work with an eye to detail. Susan, hurt by this, blames this and Rick's fear of women on the public school scholarship Gerald bullied him to take. And I can report, with great relief, that we are third time lucky. Indignantly Muriel points out she tended to her late mother, then late husband or finished off, as Susan sees it before digressing into her deluded conviction that her late husband's ghost will return with a message. Rebecca Case, The Echo, July RemotegoatJill Lawrie Ayckbourn's poignant emotional roller coaster The latest production from the acclaimed Bench theatre group has taken 20 years to stage since the first attempt and includes 3 new members making their debut. Now back in tune with the real world, she openly discusses the deadness of their marriage, something Gerald insensitively glosses over. She is on the verge of a nervous breakdown and starts communicating with a fantasy family she has conjured up where she is adored and cherished. Here we have Susan, recently the victim of a head-injury, attempting to negotiate her way through an hallucinatory existence with an idealised family in an eternal garden when rude reality threatens to intrude. The setting is vital as it shows the fantasy family to be more upper class and perhaps this helps Susan to feel more worthy in her life. This time, Susan snaps at Lucy to shut up. However, next to her fictional family, they are saints, as the trio, doting husband, Andy Steve Burt , irrepressible brother Tony Ben Tanner and perfect daughter, Lucy Kirsty Terry lead us all into a darker, disturbing world. Bill returns to check on Susan and is invited to stay for lunch, in the hope he will act as a mediator between Gerald, Susan and Rick. All perfect, all beautiful, all a fantasy. Susan also denies having a sister-in-law or son and becomes more confused when Bill says that her husband has not yet come home. At the show's centre is a vigorously no holds barred performance from Meg Fraser as Susan, with some strong support from an impressive cast.

That Ayckbourn favourite - a woman in the middle of a psychological crisis - is once again central in this engaging play, by Tom's Midnight Garden out of The Exorcist. The contrast between the two families is also presented through the use of language.

Flanked by trees and with a giant cube hanging down onto the garden, Imrie's production heightens Ayckbourn's deadly exchanges to breaking point, provoking at least two gasps of recognition from the audience on Friday's opening night. It appears that Susan has burnt Gerald's precious book of the Parish, something Susan has no memory of.

Her stage family are equally convincing, with Woodward's irascibility and Parnell's caustic twittering being both comical and cringe worthy. Andy departs, leaving Susan shaken but convinced that she has rid herself of the Family. Such endlessly sun-drenched perfection is upended, alas, by the reined-in torpor of something both more mundane and a whole lot more complicated. 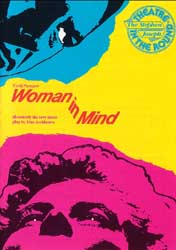